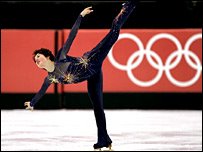 This Olympics marked the first time the female figure skaters were allowed ot wear pants in competition. That actually surprised me. I guess I had always thought there were no such restrictions (at least in this the twenty-first century!) and that women chose not to don pants. (I suppose I could try to deconstruct why women would have wanted to to keep wearing those flitty little skirts but I am not in the mood.)
So bronze medal winner Irina Slutskaya wore a very attractive pants outfit in the short program and I thought she looked great. She went back to a skirted outfit in the long program (perhaps the reason for her letdown???) But others came out in pants including Slutskaya's team member. (Hers was not as attractive, though.) And I found a little blurb about the other skaters who have embraced the skating federation's 2005 rule change:
"Other women who have gone the pants route are Fumie Suguri, competing for Japan; Elena Sokolova of Russia; Tatiana Totmianina; and German pairs skater Aliona Savchenko. She and partner Robin Szolkowy perform their edgy short program dressed in matching black unitards sleeked with white stripes."
Costumes seemed to be a big topic of conversation among commentators and fans and Slutskaya's was no different. For the most part I heard good things about her costume and the way it fit the style of her sakting and her body type. But yesterday during Olympic Ice, Mary Carillo asked skating bad boy Johnny Weir (anyone remember when Christopher Bowman used to be skating's bad boy because he didn't like to practice and had contentious relationships with his coaches??) what he thought of the outfit. He said it wasn't too bad but he liked the
traditional" look of women in skirts better. Umm, Johnny Weir, aren't you the guy who rails against figure skating traditions? Aren't your own costumes as you yourself has said like a "Care Bear on acid" or "an icicle on coke"? Seems there is only room for one trendsetter in figure skating costumes, and Johnny Weir has appointed himself the rebel in charge of all things aesthetic. Johnny, just because you may be the queerest queer figure skating has seen in a long time doesn't mean you are the sole possessor or either taste or a healthy amount of rebellion.
Posted by ken at 9:50 AM

What I always find striking is when you see footage of the skaters training in unadorned athletic gear -- they actually look like athletes! Why do they feel that they need to cover that up in the competition?

Hey was just rolling thru wanted to let ya know ya got a cool blog here Nice Job.