I caught Outside the Lines on Monday afternoon. 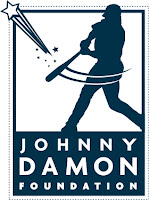 Wait, since when am I home on a Monday afternoon with the TV on?
Oh yeah, since I finished writing my dissertation! Whoop whoop! Hopefully posts will be more frequent.

Monday's episode was called Charity Conundrum. A video segment along with the podcast of the show can be found here. It was an investigation into athletes' charities and began with Lamar Odom's Cathy's Kids, which was used throughout the episode as an example of a bad charity: deceptive in its purpose, high administrative costs, mismanagement, lack of oversight. Attempted interviews with Odom did not go well either. He doesn't seem to know where the money goes (not to underprivileged children but to kids on two elite AAU teams) and is quite defensive when questioned about where the money is going. He kept saying "it's my money, it's my money" as if 1) he doesn't have to answer questions about it and 2) oh, yeah, it doesn't matter--because it's not his money. Once it gets committed to a charity, how it is handled becomes the responsibility of whoever oversees the charity. In this case, his former high school basketball coach, who makes over $70,000 a year just to oversee this charity which has been almost defunct in recent years.
Poor Lamar Odom, it's not enough that he married into the Kardashian family, now he is getting raked over the coals--on ESPN no less!--for trying to do good in his mother's name.

But he's not the only one. The OTL investigators found that almost three quarters of the athlete charities it looked into do not meet the standards set by the Better Business Bureau, GuideStar, and Charity Navigator. In fact the athletes' charities are actually working for other non-profits. This is legal but somewhat deceptive. Also, given the mismanagement and lack of transparency of many of these charities, very little money gets to the partner non-profit.
So what seems to be happening is that athletes start these charities to improve their image and for potential tax breaks.  [This reminded me of a recent episode of House of Lies (another show I now have time to watch!) where Matt Damon plays (a version of) himself seeking a charity to promote his image.]

The charity consultant interviewed suggested that most athletes would be better off throwing their celebrity behind an existing charity. This reduces overhead, meaning that more money can go to the charity. And it leaves the management of a charity to people who have experience doing this kind of work.
I complain about the pinkwashing of athletics, because I find the lack of information presented to potential donors problematic. It is up to the giver to do the work, which she rarely does because cancer is a good cause, right? The OTL report encourages us all to educate ourselves before we give. We should apply this standard to all our charitable giving. The organizations listed above can help in this process.

Email ThisBlogThis!Share to TwitterShare to FacebookShare to Pinterest
Labels: charity

Hey!
I was just surfing around and took a look at these reviews. I can’t resist myself to leave a comment and trust me it’s hard to impress me.

Vachel
Charities Partners
Support Charities
Seats For A Cause
tix4cause.com