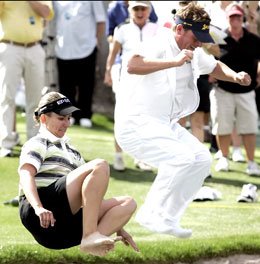 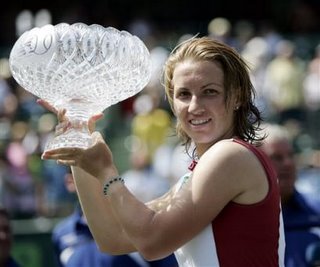 It was a good weekend for former top performers in tennis and golf. Both Karrie Webb and Svetlana Kuznetsova won tournaments this past weekend. The bigger win was probably Webb's at the Kraft Nabisco (still known as the Dinah Shore to every lesbian in the U.S.) who had been in a title drought for over a year and a major drought for several. She very much deserved it and earned it winning in the first playoff hole against Lorena Ochoa. Alas I didn't see this momentous event because Ebuz pulled me off the elliptical trainer at the gym where I was very into both my workout and the tournament (which I was watching on the cardio tv) all because of a silly tornado that had been spotted in our county. So we left and by the time we got home it was over. I couldn't even find the results on the ESPN ticker (quel surprise!) and had to go online eventually. Oh well. I was happy for Ochoa that she came back from her deficit after leading for three rounds and faltering on the final day. But before she hit her first playoff drive she crossed herself and the commentators spoke of this ritual and also how her father came to the first tee that day and they prayed together. This, for lack of more critical language, weirds me out. Sure, sure--everyone is entitled to their religious beliefs and at least when Ochoa enacts hers she isn't harming anyone else--directly anyway. But still despite the many connections we can make throughout history between religion and sport I find it somewhat anachronistic in the contemporary United States. Of course Ochoa is Mexican so I am clearly putting my own white American standards on this act and I do understand the cultural significance of Catholicism in Mexico. But still...a little but it reminds me of Michael Chang's statements about owing all his success to God. Do we really believe that any god (besides the ones of ancient Rome and Greece) cares about sport? I realize I seem to be negating my whole academic career based on the cultural significance of sport but we're talking about a higher power here. I don't think God helped Michael Chang win that one French Open or Lorena Ochoa make it the playoff against Karrie Webb. And certainly if it was the Christian God everyone is always talking about here in the States he certainly would not have had her lose to a lesbian from Australia!
That wasn't really where I was planning on going with this post but oh well.
Anyway, kudos to Kuznetsova as well for starting to come out of her post-major (US Open 2004) slump. She had a great tournament beating Mauresmo (sniff sniff--but I guess is someone has to beat her Kuznetsova is ok) and Sharapova in the final.
It's been an exciting start to both the golf and tennis seasons this year; I'm looking forward to seeing what happens.
Posted by ken at 11:56 PM

Sorry about pulling you off the treadmill to take shelter from the tornado. We haven't gotten used to tornado warnings (being from New England) so I'm still inclined to take it seriously when all the TVs and radios are going "this is not a test...this is not a test..." But it also occurs to me in retrospect that maybe we'd have been safer at the gym than in our 100-year-old house.

Anyway, to your point about Webb and possibly Sveta...maybe god IS a lesbian...and a fan of women's sports.

Well that would just solve all my problems!