Stop going to the White House 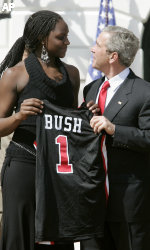 As is its periodic custom, the White House hosted NCAA championship teams on April 6. Maryland was well-represented with three teams: the recently crowned women's b-ball champions along with field hockey and men's soccer. Let's contemplate this event for a sec shall we? The White House meaning President Bush who makes a speech (including little quips about what the VP can learn from the championship rifle team) and takes a picture with the teams, wants to celebrate these champions. OK--that's fine. Too bad his policy doesn't support these teams who have triumphed in spite of Bush's attacks on Title IX. The initial committee Bush put together in 2003 (I might be off on the date) came in with recommendations to change Title IX to make it more "fair" to men basically. Committee members Julie Foudy and Donna deVarona dissented with their own report and the outcry from groups such as Women's Sport Foundation and other allies was so loud that the recs were dropped from consideration. And then about a year ago, the Sec. of Education issued a "clarification" of prong three of the regulations that set the bar for compliance much lower. It was essentially one of the recs now disguised as a clarification.
Setting the bar lower means smaller sports and women's sports suffer. Luckily UMD has a strong women's b-ball program so it would be unlikely to be affected though theoretically it could be. But field hockey and men's soccer? They could easily be on the chopping block when the budget gets tight--which it will because MD fields high profile b-ball programs for men and women and a decent football team too. Field hockey is usually kept around because it keeps some of the numbers in line (it doesn't have an equivalent men's sport). But men's soccer is in a precarious position. Collegiate soccer is not that popular. Granted it doesn't eat up a huge chunk of budgets but that doesn't seem to matter (UNH cut tennis which costs very little comparatively to sustain).
So the point of all this is--why doesn't anyone ever protest these pleasant little photo ops? People in other sectors turn down awards and accolades from governments whose policies they disagree with. Why don't athletes say "hey this guy is not working for our best interests"? (on so many levels of course but I'll just keep this to athletics for now.) Would it really take so much to say "thank but no thanks. We'll just wait for someone who actually supports equity for all"?
I am not surprised it was not Maryland given they still refer to their female teams as the Lady Terps. And the picture of a strong, tall black woman standing over the president as she presents him a shirt is pretty priceless in my mind. Still, I hope some team or coach raises the issue soon and takes a stand. I think it prove instrumental in raising awareness about the continued inequities that Title IX has allegedly cured.
Posted by ken at 7:43 PM