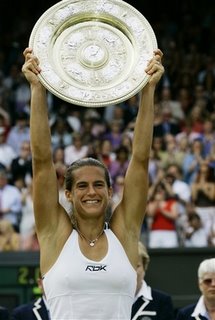 go to Amelie Mauresmo for a spectacular win at Wimbledon and to Annika Sorenstam for her US Open playoff win against Pat Hurst in Newport a few weeks ago.
I have been packing and moving and unpacking and painting during some of the best events of the summer. But I did catch some of Mauresmo's win over a pouty Henin-Hardenne. It was a sweet victory especially given Henin-Hardenne's withdrawal in the championship match of the Australian Open.
I thought Sorenstam's was equally spectacualr given that on the final day of play (which was 36 holes) there were at least 5 contenders going into the final three holes. Sorenstam missed a putt that should have gone in that would have given her the championship. But she came in strong the next day.
Upcoming this summer is the US Open series. To watch for:
1. Will Serena Williams be back (that's the plan) and how well will she do after her "mental break"?
2. Will Venus Williams (who made it to the finals of the mixed at Wimbledon--kudos for that and for sticking around the second week after being upset in the singles) offer a challenge ion the hard courts?
3. How will Hingis hold up on the hard courts?
4. Has Clijsters resigned herself to being a one-Slam wonder, content to make it to the semis and retire in the top 5?
5. Will the Russians reign in the hard court season?
6. Will Lindsay Davenport be healthy enough to play?
So many questions.
No answers for now.
I am off to the Gay Games in Chicago so I expect some good blogging to come out of that. When I get around to it anyway.
Posted by ken at 9:25 PM

Lindsay has already pulled out of Stanford, which looks like the worst news possible.

I think Kim has a fairly good chance of defending her U.S. Open title. She really shines on the hard courts.

As for the Russians, I'd like to see Zvonareva rev up her comeback on the hard courts, too. And I hope Petrova will be okay to play.

As for Amelie...well, I am ecstatic.

I think it will be a fascinating hard court season and I can't wait to get to the US Open and see for myself!