I was just thinking about Angela Ruggiero the other day while I was cleaning out my email contacts. (I decided I probably didn't need her email anymore if the one I had was even still valid.) And then I read that she's retiring.
Interesting timing. The national team is in Blaine, MN right now. Well the women who hope to become the national team anyway.
I would hope Ruggiero retired of her own volition and that she didn't get pushed out. I haven't seen her play in a while but she seems good enough to still make it. 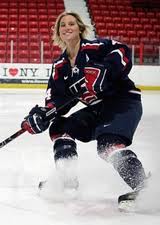 I am bummed though. The World Championships happen in April in VT and I was planning on going. I saw her play in the Olympics in 2002 and it would have been nice to see one of the few players who remains from that team.
Posted by ken at 11:36 AM