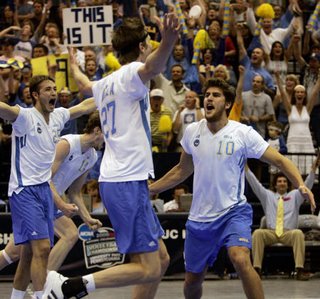 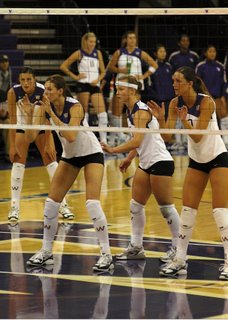 I don't really spend a lot of time thinking about the gendered aspects of athletes' uniforms usually because I, as a skirt-wearing tennis player, embody some of the contradictions I find these uniform standards pose. But I am putting that aside for a moment because of the very egregious differences I noted this past weekend during the NCAA volleyball championships.
I should note that I am not an avid v-ball fan but enjoy it when I can find it. The TV Guide channel said College Volleyball Championships and I turned to ESPN2 and found men. I had assumed it would be women for some reason but as we all know Volleyball or Soccer or Golf in the tv listings equals the men's version. One of my many pet peeves. But moving on...
More than the fact that I saw men playing volleyball was the shock that came when I saw what they were wearing: baggy shorts and shirts. Now I had seen men's beach volleyball before and they wear swim trunks of varying degress of bagginess. But that was beach volleyball where women wear bikinis that don't even cover their whole asses. (That's another story though.)
What I am familiar with on the collegiate volleyball scene though is the women's uniforms. I saw a presentation on the increasing skimpiness of them last year at a conference. And it's regulated skimpiness too. The shorts are getting shorter, the tops tighter (though some retain some semblance of proper tradition with collars).
That the uniforms sexualize these athletes is not especially surprising--but I had thought they had some functional purpose--like female gymnasts' leotards. But after seeing what the men were wearing last weekend, I am certain this is not the case. I don't know enough about volleyball to know if the style is alleged to serve some necessary athletic function but if so the presence of men in baggy shorts and oversized (wick-away) tees would seem to negate any argument of the kind.
Posted by ken at 10:55 AM

Also, why are the women in the photos wearing knee pads, while the men aren't? Were they playing on different surfaces? It would be interesting to know whether the pads are voluntary or regulation.

Yeah, I wondered that too but haven't been motivated enough to go look it up. I assume guys fall on their knees trying to dig out spikes, etc. I wonder is this is a case of extra equipment for women based on a perceived lack of physical capabilites...
Any insights are appreciated.