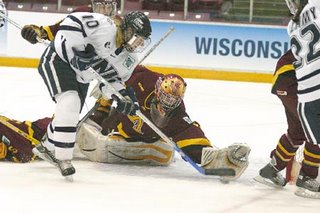 Just back from the Twin Cities, the site of this year's Frozen Four tournament. It was a great weekend of hockey. Though my beloved Wildcats lost in the semifinals on Friday night, it was a great game and I think this marks the beginning of a few good years of being a contender. They had an amazing season, an incredible 25+ no-loss streak, and really developed their rookies, two of whom started on Friday night.
I was somewhat disappointed in the crowd size. My father, who flew out from MA to meet us there, said there were more people at the UNH-Harvard match-up in the regional game last weekend. This was surprising given that Minnesota, though marked the away team because of their #4 seeding, was UNH's opponent. They had home-team advantage. It was their stadium and not as many MN fans came out to support them as I would have figured. Sunday's championship match-up between the Golden Gophers and Wisconsin however produced a lot more people. Fair weather MN fans perhaps? It's possible. I interviewed a MN native a few years ago who had played with boys for the majority of her career. She said despite the critical mass of female hockey players in the state (MN teams barely need bother recruiting outside the state), women's hockey has, at best, second-class citizenship status, and is often seen as little more than a joke. The people who came this weekend of course probably do not see it as the latter or they wouldn't have bothered showing up. But I would bet that many in attendance Friday night would have eagerly traded the MN women's win over UNH in the semifinals for a reversal of the dismal loss of their men's team to perennial first round loser Holy Cross in the regionals that same night.
I think I had envisioned MN as being the epitome of women's hockey in terms of enthusiasm and overall support, but I now see that we in New England are just as eager to show our support for the women's game. (Of course this is all relative. Women's college hockey in the US has so many strikes against it.)
And on a happy ending note: this morning looking for all the b-ball scores I missed last night driving home from the tournament I saw the ticker had NCAAH and showed not the men's regional scores but the women's final score Wisconson 3, MN 0 (little bit of revenge there). Now if only the ticker would have noted that the 2006Patty Kazmaier winner (announced Saturday night) Sara Bauer was a member of the victorious Badgers. Oh well maybe next year.
Posted by ken at 3:18 PM