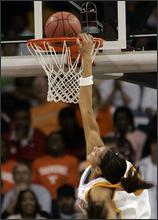 In the first round of the NCAA tournament Tennessee wiped the court with first-time tournament participant Army. The highlight of the game though--at leat according to every commentator and story that followed--was the two-dunk performance of Candace Parker. Indeed, it was a history-making performance--the first woman to do it in the tournament and she did it twice. What I kept wondering what it all means. Before I begin my musings I want to say that in no way do I think that Parker or any other woman shouldn't be dunking.
So that being said--what does the emergence of a female dunker say about the women's game? Certainly it is a sign that more women will follow. The proverbial bar has been raised. Seems like good news. But on the other hand, I frequently hear people say they appreciate or enjoy the women's game because it doesn't have players doing flashy dunks ever other shot--that the women's game is more strategic, more thoughtful, etc. (Note this is also the argument many proponents of no-checking women's hockey use as well and to some extent I have bought this version.) But I also hear the people who poo-poo women's basketball complain that it isn't as exciting as the mens's game. Of course, and I seem to side here to some extent with Baltimore Sun writer Milton Kent who notes that if the poo-pooers aren't there yet--a few dunks won't bring them over.
In fact those people might read all this hoop-la (no pun intended) and say "One girl (and they would say girl--not woman) two dunks. Big deal." And they might be right. Two dunks do not make a game--they don't even win a game. Parker probably took the shots because Tennessee was in no danger of losing. Can you imagine if she had attempted them and missed? Talk about hoop-la. I predict we won't see many more dunks in this year's tournament from Parker or anyone else because with second round almost over the stakes are getting higher.
I will be interested to see what next year (and the year after that and so on and so on) brings though in terms of the women's game. Certainly there are no dunk restrictions (like no checking in hockey) that prevents women from developing the skill. It could be a welcome addition to an already exciting game. We shall see...
Posted by ken at 7:48 PM