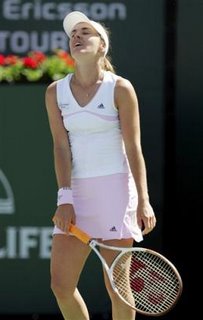 After Martina Hingis's upset of Lindsay Davenport the other day, she fell in straight sets to Maria Sharapova in the semifinals of the Pacific Life Open. The 6-3, 6-3 match was allegedly closer than the score indicates and writers and commentators hail Hingis's comeback efforts. Indeed, kudos for Hingis for putting in the time and incredible effort than has allowed her to rise rapidly up the rankings. One article I read noted though that Hingis is still without a title in her post-comeback. Well seriously--she's only been back since January--there are plenty of people ranked above her who are without a title too. But it reminded me of how Hingis went out--no not with ankle and foot problems but with a consistency (arguably brought about by her determination and excellent strokes) that kept her in tournaments until the quarters or semis. So pretty much the same place she is in now. She can beat almost every time those ranked below her but can beat only some of the time those ranked above her. In other words--sure she has improved most of her shots and her fitness and has kept that mental edge she has always had but that has--in this much more powerful, aggressive version of the women's game--basically placed her in the same place she was when the game first started to turn. I had very few expectations for Hingis when she came back but I wonder what her own expectations truly are. I am still doubtful she will ever reign over women's tennis again. But then again I am doubtful any one woman will ever dominate the game as in days of yore.
Posted by ken at 5:11 PM

I saw the match. Hingis made Sharapova work like mad for every point, and Sharapova brought her "A" game. Afterwards, Hingis said that endurance is still her main problem--that she knows what she needs to do to throw a power player off her game, as she did with Davenport, but after so many matches, she still loses steam.

I take her at her word on that, and since her endurance is better now than it was a month ago, I expect it to get even better.

But it is Hingis's serve that is troubling. Though her first serve has improved, she still isn't getting enough first serves in. I would like to see her hire a service coach. The endurance problem will take care of itself, I think, but the serve problem is, in my opinion, a bigger obstacle.

I remember before Hingis retired that her serve wasn't great and that commentators would say that it needs work. But they also said that about Venus's second serve. It wasn't really her serve that drove her from the game the first time--it was the overall evidence that she couldn't keep up with the changes in the game.
If it truly is a good serve that keeps women from succeeding then it becomes near impossible to explain Elena Dementieva.
I guess I fall back to my original thoughts on Hingis and her comeback: it's kind of interesting but frankly I dislike her personality; I think she harbors some racist and homophobic tendencies and I rarely find myself rooting for her.

I used to be very conflicted about Hingis; I loved watching her game but I was also very put off by her personality. Now, however, she seems to have matured quite a bit, and I can just enjoy her game.

Good point about Dementieva. However, Hingis appears to be improving with every tournament, and I look for her to figure out a way to beat the top players some of the time--actually, she has already done that--I look for her to beat them more frequently. Perhaps my faith is misplaced, but I think Hingis will do better than many believe.

Well I guess if Hingis does exceed my expectations both on and off the court you can do the "Na na na-na" dance complete with tongue and facial gestures. I would humbly acquiesce at that point.