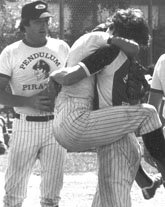 I was in San Francisco this past weekend and went to a reception at the GLBT Historical Society and Archives. I actually kind of tagged along with friends with whom I was going out with afterwards but I am really glad I went. There was a new exhibit on the history of GLBT athletes and sporting events. (I stole this picture from the web site. I hope they don't mind. I am doing it for promotion rather than exploitation.) It was very well-done. There were lots of pictures and various installations. I was impressed given that the organization is primarily volunteer-based and in a very small space.
The archives were amazing too. They have tons of stuff one could get totally sucked into--pictures, letters, flyers, signs. I hope to get back there for some research on the Gay Games.
Anyway--if you're in the bay area check it out (it's about 2 blocks from the Montgomery BART station). And if you want to help preserve GLBT history (it was mentioned that often times the archives get donations of things that would have thrown out by family members such as a 1970s wedding album from a couple that were together for over 40 years and died in the same retirement home) make a donation.
Posted by ken at 11:50 AM

ken, you can only go back if you take me with you. I'm always up for a good archive!