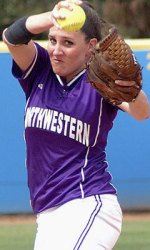 It was a weekend jam-packed with sports--well sports I am interested in anyway: softball, tennis, and women's golf. It was especially difficult this afternoon trying to channel switch between the three when they overlapped.
The saddest moment of the weekend was Amelie Mauresmo's three-set loss to Vaidisova. Though Mauresmo was my sentimental favorite to win the French Open, I was not that surprised that she lost and to an up-and-coming teen. Didn't she lose to an -ova last year too? I just didn't see her making quick enough work of her early round opponents to carry her into the second week with enough mental and physical confidence. I don't know is going to show up at Wimbledon (Serena W. is out but Davenport?) but I think she will go farther there.
The high of the weekend has to be Northwestern's amazing unbeaten streak at the WCWS. They took on #1 seed UCLA this afternoon who, coming out of the losers' bracket, had to win this game. NU held a 1-0 lead for much of the game and going into the 7th when UCLA in their last at-bat scored the tying run off a pinch-hit by Kristin Dedmon. But NU, who easily could have had a let down and just decided to re-group for the evening game because they were not facing elimination, came back strong and fast. Williams and Cooper hit back-to-back home runs and pitcher Eileen Canney held her ground in the last half inning to pull off the victory.
And in the not-so-bad category was Annika Sorenstam's second place (tied with 2 others) finish at the ShopRite Classic. Annika had an amazing (or so I heard because I was busy watching the NU-UCLA excitement) 40-foot eagle putt on 18. But I love Annika because she's really humble in victory and defeat and I think she handles the inane questions the media asks expertly. Case in point:
Q: You seemed very confident yesterday when we talked to you, so is it a little disappointing to come up short today?
ANNIKA SORENSTAM: Well, sometimes when they play well, there is not much you can do. For me to shoot 4-under, that is a good score. It was not enough today. I needed another three to tie and that is a stretch, so like I said when somebody plays well you just have to congratulate them. One or two better would have been great, but it just did not happen.
Note the stupid question; of course it is disappointing to lose after you have been leading or near the top of the field throughout. But note Sorenstam's credit to those who played better.

And on a final note: it looks like Tennessee is about to be knocked out of the WCWS by Arizona who got beat by the Lady Vols this afternoon. But really what do you expect from a team that explicitly invokes its femininity? 'Cause everyone knows "ladies" can't throw (or hit or run).
Posted by ken at 8:01 PM

The Amelie thing looked like a meltdown to me, too, and honestly, I hadn't expected it. I thought she was past all that.

In her interview, she said she felt mentally fit (she did do that little dance after she finally closed out the first set), but that she broke down physically. I guess we will never know, but it seems odd (unless she is coming down with something) that someone as physically fit as Amelie would would have a physical breakdown.

It made me feel kind of ill.

A physical breakdown? It seems unlikely and not necessarily a wise statement given that many still put that * next to her Australian win because of the "benefits" she received from the several withdrawals she got along the way.
As much as I wanted her to make it all the way, I just didn't have that kind of faith. But I did expect her to make it to the semis at least.
Oh well, I am missing the finals this weekend anyway to go camping. I'll just hold out for Wimbledon.