Oh no they didn't! 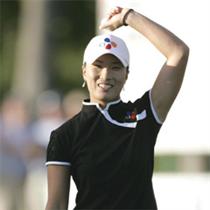 Michelle Wie won her first major this weekend at the LPGA Championship.
Oh wait--no it was Si Re Pak who won the tournament in a playoff against Karrie Webb, who herself won the first major of the year.
Headline said Wie; article was correct in noting that it was 30-year old Pak, already qualified for the Hall of Fame, versus the teenager who hasn't won a major yet.
What does this faux pas suggest? Perhaps on the most basic level it shows that there is a sloppy headline writer somewhere. But of course if I was happy with things on the most basic level I wouldn't bother to blog.
Obviously I don't know what happened but it seems like one Asian golfer was all too easily confused for another. Wie of course is the headline grabber. Ask someone not familiar with golf to name a female golfer my guess is that either Wie or Annika Sorenstam are the top guesses. Pak, though just a few years ago was tearing up the LPGA. She, like Webb, have had some rough years. This, in part, is why Pak's playoff win was so spectacular (not that I saw it because I don't have the Golf Channel--see below for another reason why this headline mistake is not so hard to believe). And this is also why the headline was so egregious in its error.
We're not all golf fans--I understand this. But mistaking an American teenage golf phenom with a (young) South Korean veteran is just...well it's bad. In the end it just shows how women's sports (and especially how women of color fare in them) are seen as so unremarkable that one athlete is mistaken for another.
Posted by ken at 8:50 PM

OMG! What a major f**k-up. Seriously -- proof that to the white/hetero/male establishment that is that sports-industrial-complex, all Asian women are the same.

But hooray for Si Re Pak. I have liked her ever since I saw her play in person at the Championships in 2004 (when it used to be in Wilmington).

I caught an error similar in form (though not in signficance) yesterday on public radio. The story's lead in, or "headine," announced that a 20-year old Swiss player had just won the French Open for the second time. The rest of the story went on to correctly identify the winner as the defending champion Spaniard Raphael Nadal, and the runner-up as Switzerland's Roger Federer.

I read somewhere that on the French Open website this was how the female teen phenom was listed:
Maria Sharapova (USA) vs. _____
She does seem so very American so I see how the mistake was made but really haven't we all heard the sob story about her immigration with her father to Florida with no money and no mother, blah blah blah to know she is a Russian.

Ken, you should send this link to Margaret Cho. I bet she would have a field day with it. I'm already laughing, just thinking of what she would do with it.