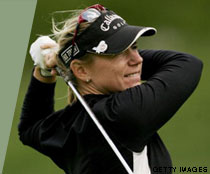 I swore I had blogged about this last year but when I went back through my archives I realized I only started blogging in earnest in July 2005; after the McDonald's LPGA Championships were held. And I can't remember whether ESPN and/or one of the major networks actually showed the tournament last year. Regardless, this year it's ALL on The Golf Channel this year. I have been reminded of course that I am not even going to be near a television this weekend. But that is little consolation (especially since I am definitely here today).
Frankly I was surprised that not even the final round would be on a more accessible network. I mean Annika is going for her 10th major and Michelle Wie is eager to prove she can win against women. With the crop of young women that have been in contention this year including Paula Creamer and Morgan Pressel who have made good showings the past few weeks plus the folks you can never count out: Gulbis (hungry for a first major), Carrie Webb who apparently has her game back in control, Christie Kerr (though her putting has been off lately). And then there is a whole new rookie (or near rookie) group from Asia who are ubiquitous figures in the top ten including Japan's Ai Miyazato who lead going into the final round and eventual champion Seon Hwa Lee of Korea who won by 3 strokes.
The whole point of this is really to say that this kind of action needs to be on ESPN in the first rounds and one of the big three networks on the weekend. Getting highlights on Sports Center is more difficult when ESPN isn't the one shooting the footage to begin with. Basically if it isn't on a major network it's like it doesn't exist. This has what has happened, in my opinion, to a lot of the events that have been contracted out to the Tennis Channel. Mary Carillo just commented on the number of titles the two Belgians have accrued so far this year noting that it's not surprising that these two are in the semis. But it is a surprise when it's so difficult to keep track of who has won tournaments to date. All I knew about the European clay court season this year--and I am tennis fan--was that Hingis won Rome.
Guess I'll just have to take what I can get including what looks to be a very good match between Henin and Clijsters.
Posted by ken at 10:08 AM