Two weekends ago I headed north to Burlington, Vermont for a quick, last-minute getaway that happened to coincide with the IIHF Women's Hockey World Championships. (Timing is everything!) Here is what I observed:
Nothing indicated as we drove into Burlington that this event was taking place. I did however learn about when the farmers' market was starting and an upcoming parade. So that was a bummer. The store on the pedestrian mall that sells UVM merchandise did have a window display of USA Hockey gear and a poster of Jenny Potter and Angela Ruggiero (who actually "retired" this year and so wasn't playing--oops!).
Also good--the day we arrived was the day of the US versus Canada first-round game. Tickets were sold out--good sign generally. Not so much for us. But thank goodness for iPhones and craigslist and some good bargaining skills. Tickets were scored a few hour before game time.
And the game was amazing--if you were an American fan. I actually was more interested in seeing a good game regardless of the winner since both teams would be advancing regardless of the outcome. But holy crap--the display of skill and fitness that the US team put on was amazing. Harvard's Katey Stone was coaching this team. And though they didn't win the whole thing, I think the way she got this team into incredible form should put her into contention for the job at the next Olympics.

So, yeah, the US lost to Canada to the finals in overtime. And of course there was plenty of press--not so much about the championships themselves (i.e. reporting on games, players, plays, coaching) but on the state of women's hockey. A somewhat contested state since the last Olympics when we saw quite lopsided scores and heard the higher ups in the IOC saying women's hockey had to get its act in gear (i.e. move quickly toward parity) if it wanted to stay in the games. I think they would encounter huge opposition if they just eliminated women's hockey. Not that the IOC seems to do a whole lot more than pay lip service to gender equity.
This article out of Canada discusses the difference between women's hockey in North American (well Canada and the US) and Europe because of 1) the growth of intercollegiate hockey in the US which benefits both the Americans and Canadians (a few Europeans) and 2) the resistance from the old boys' network in Europe where women's hockey has had some trouble being recognized as legitimate.

Also in the above link we learn, from a Canadian administrator (the GF turned to me turning the game and asked why so many old white guys were running women's sports; she's clearly been hanging with me too long) that at  the beginning of the women's championships (1990) they decided not to have checking because parents--especially mothers--didn't want to see girls being taken off the ice on stretchers. 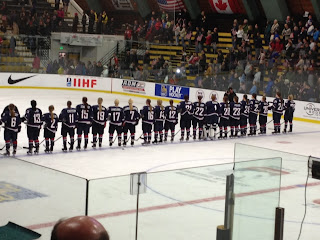 Grrr....violence and pain is socially acceptable, encouraged even, for boys and men, though. I just assigned Don Sabo's article, "Pigskin, Patriarchy, and Pain" about the social rewards boys and men receive for engaging in violence and enduring pain in the context of sports--and the physical and emotional price they pay for it. I don't want to see checking in hockey--anywhere. But I think the difference in the rules reinforces the various hegemonies at work here: pain and violence is good for me; and the women's game is inferior because they are not as physical.

But observers and participants say progress is being made. Ruggiero noted that countries with historically strong men's teams, like Russia, need to do more, however, to grow their women's program.  But it was a goo sign when Switzerland won the bronze at this year's championships. It was the country's first medal in women's hockey.

Women's Hockey is going to be gone from the Olympics in the near future, as it should be. The lack competitiveness is appalling. International women's softball was much more competitive and it got launched. Women's hockey isn't even close.

I've always been mystified by the lack of action in the women's sports world relative the ACL injury disaster that has been playing out in women's sports for decades until recently. Then I ran across a few articles about sports injuries being somehow perversely attractive to lesbians, hence facilitating their mating rituals. Now I'm starting to understand better. It certainly isn't going to help butch women's sports like hockey, rugby and lacrosse become more popular with mainstream fans, but at least it shines a light on the motivations of you and the LGBT crew.