So there are--don't be shocked now--lesbians who play professional tennis. And they display various levels of lesbionica. Sure we can kind of tell (well some of us anyway) who they are using our super stealth and highly (over?) developed gaydar. Some are out, some are in the closest, some are in some kind of unacknowledged but out state. But there isn't a whole lot of range no matter their status. Most of them retain some version of acceptable femininity wearing skirts, keeping their hair longer, not mentioning girlfriends or putting them in the players' boxes. Sure Martina Navratilova seemed to get more butch as she grew older--but she was still wearing skirts when she retired. She returned to the tour seemingly more comfortable creating her own terms.
I am not going to get into the whole "choice" debate here, because that's not the point. The point is the lesbians on the tour do not seem to reflect the range of lesbian performance out here in the real world (you know, kind of like The L-Word). But there's a new* butch girl in town and she gave Elena Dementieva, who is considered a favorite to win the US Open, a tough time in the opening round. Akgul Amanmuradova from Uzbekistan had three set points against Dementieva in the second set. She couldn't convert but she definitely put some pressure on Dementieva.
Let me say right off (well not exactly right off since I have just spent some time talking about lesbians) that I don't know if Amanmuradova is gay. But she is certainly not conforming to the dominant version of femininity often adhered to in tennis. It was such a contrast to see Dementieva in her halter dress on one side and Amanmuradova in baggy shorts and shirt, hat on backwards a la Hewitt and sunglasses. I loved it. I wasn't listening to the match so I don't know how or if the commentators presented it. The highlights last night were brief and there was no mention of Amanmuradova's appearance--just, of course, the pronunciation of her name. 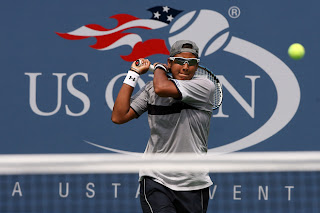 To me, it doesn't matter if she is gay or out. I know the importance of having out athletes. But I also see a lot of those out athletes engaging in pretty apologetic behavior that can border on self-hating. Amanmuradova showing up on court the way she felt comfortable in defiance of any kind of traditional feminine attire can be just as effective in challenging the dominant gender norms that keep gay athletes in the closest and non-conforming straight athletes having to constantly prove their heterosexuality.
She may be my new favorite player to watch. She's ranked 78 and has had wins this year over Nadia Petrova, Michaella Krajicek, and Agnes Szavay. And at 6'3" she is the tallest player on the WTA tour.

* ok according to her Wikipedia entry she isn't all that new--she's 24; no year listed as to when she joined the tour but she has played a number of Challenger events.
Posted by ken at 8:21 AM

Akgul is a good hitter. She also has an especially cool name.